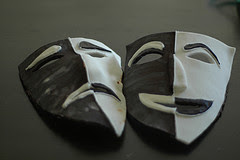 We've really wedged ourselves between a rock and hard place with all the bankruptcy reform rhetoric of the past few years. Now that we've convinced many consumers that bankruptcy is to be avoided at all costs and can never be an acceptable part of responsible financial administration, we really need to convince them that a bankruptcy by GM and/or Chrysler would be an O.K. thing--indeed, a normal market mechanism for regulating their financial distress, far superior to government intervention. As far as I can tell, the only real problem with using the world-famous Chapter 11 to solve GM/Chrysler's problems (just as we did successfully for Continental airlines, for example) is that consumers would react irrationally, equating a Chapter 11 filing (reorganization with a view to renewed financial health) with "going belly up" or some similar rhetoric of "failure." So bankruptcy is no good for David, but it's O.K. (probably essential) for Goliath, but in an ironic twist, Goliath's business depends upon lots of Davids buying Goliath's goods, and policymakers have bent over backwards to convince David that a bankruptcy filing always reflects poorly on the filer. What a mess!

O.K., there's one more big problem. Businesses are finding it harder and harder these days to reorganize in Chapter 11 because they can't find debtor-in-possession (DIP) financing to support their turnaround efforts. If average businesses can't find DIP financing, where do you think GM/Chrysler can turn for a loan . . . ? The Treasury, of course!

Seems to me we ought to get off of this merry-go-round with an out-of-bankruptcy restructuring for GM/Chrysler, funded by loans from Uncle Sam, assuming Uncle Sam's analysts can conclude that GM and Chrysler have some hope of a sustainable, competitive business down the road. That's the big question, and an interesting article in today's W$J on the latest report concerning residual value suggests that GM and Chrysler have a serious burden to carry in convincing Uncle Sam that they can make decent cars and government financial support for their business in or out of bankruptcy is warranted.
Posted by Jason Kilborn at 12:18 PM