Bitcoin and Other Cryptocurrencies: Regulatory and Commercial Law Concerns

Interest in cryptocurrencies is growing, even after Mt. Gox, formerly the largest international Bitcoin exchange, filed for bankruptcy in Japan following $473 million in losses  (See also, Almost Half a Billion Vanishes). Bitcoin’s resulting drop in value, from a $1,000 high to around $500, should be a reminder that cryptocurrencies are volatile payment systems under which the applicability of existing regulatory and commercial law is unclear.

Because Bitcoin is not backed by any government or central bank, banking and financial industry regulations may not apply to Bitcoin transactions. For this reason, Federal Reserve Chair Janet Yellen testified before Senate that the Federal Reserve lacks regulatory authority over Bitcoin. Similarly, the FDIC indicated in at least one context that a money transmitter like PayPal is not a bank for federal banking law purposes. Consequently, Bitcoin users cannot expect deposit or investment protection from the FDIC or customer protection from the SIPC.

Notwithstanding, it appears Bitcoin exchanges may be subject to money-laundering rules under the Bank Secrecy Act. The U.S. Treasury Department’s Financial Crimes Enforcement Network (FinCEN) previously stated that exchanges must register with FinCEN as money services businesses and report large or suspicious transactions. This is not surprising given the anonymous and irreversible nature of Bitcoin transactions, which make them susceptible to money laundering and other criminal activity. For these reasons, it is unclear how Bitcoin exchanges can fully comply with reporting requirements.

It is equally uncertain how Bitcoin transactions are treated under existing commercial laws not designed to address cryptocurrency concerns. Because Bitcoin is intangible, yet acts as a store of value and a financial medium for the exchange of goods and services, it is difficult to classify as a property type. Under non-bankruptcy law, bitcoins are likely a “general intangible” or “payment intangible” for purposes of Article 9 of the Uniform Commercial Code (UCC), as adopted in most jurisdictions. Consequently, a creditor taking bitcoin as collateral should obtain a security agreement from the debtor sufficiently identifying the collateral. Perfection of the security interest would require filing a UCC-1 financing statement in the state where the debtor is located. Failure to perfect may render the creditor’s security interest subject to avoidance by a subsequently appointed bankruptcy trustee. Interestingly, because secured lenders sometimes take blanket security interests in all of a debtor’s property, including general intangibles, many banks and financial institutions may already hold security interests in a debtor’s bitcoins without realizing it.

At least one commentator has also indicated that, because Bitcoin exchanges may not constitute banks, bitcoin held by an exchange would not qualify as a “deposit account” under the UCC, but rather as a “payment intangible.” Thus, perfection in a debtor’s cryptocurrency held on an exchange cannot be accomplished by an account control agreement typically used to perfect against deposit accounts. As a result, when a debtor transacting  business through a Bitcoin exchange defaults, it may be harder for secured creditors to liquidate their collateral.

Given Bitcoin’s inherent volatility, and the difficulty secured creditors may face collecting against it, Bitcoin’s use as collateral in conventional lending transactions remains highly suspect. For these reasons, cautious lenders should consider including representations and covenants in lending agreements to prohibit or limit a borrower’s use of Bitcoin.

In bankruptcy, a debtor’s bitcoin at filing would likely qualify as property of the estate since the debtor would have a legal or equitable interest therein. Accordingly, a bankruptcy trustee should be able to assert control over a debtor’s bitcoins (or their value) and liquidate them for the estate’s benefit. A debtor’s failure to schedule or adequately explain the absence of previously held bitcoins, or turn over existing bitcoins to the trustee, could provide grounds to object to the debtor’s discharge. A debtor’s pre-bankruptcy transfers of bitcoins may provide grounds for a trustee to pursue preference or fraudulent conveyance actions against bitcoin recipients. However, identifying the recipients may be complicated by Bitcoin’s anonymity. Regardless, prudent trustees should inquire about a debtor’s existing or past Bitcoin investments or transactions.  See, The Hazards of Lending to Bitcoin Users.

Now that most states have adopted the 2010 Amendments to Article 9, a new copy of the ABA's Portable UCC (5th edition) might be helpful, if you've not already seen it.  In other interesting new reads:

1. The CISG as Soft Law & Choice of Law: Gōjū Ryū? (Lisa Spagnolo).
2. UCC Suvey - Sales (Jennifer Martin).  Highlighting cases from 2013 decided under Article 2 of the Uniform Commercial Code. Particular Article 2 highlights include the mixed goods case of Whitecap Investment Corp. v. Putnam Lumber & Export Co., a case involving multiple transactions for treated lumber where the court found that application of the “predominant purpose” test to determine whether Article 2, or common law, applies to disputes is dependent upon whether the parties have an overriding agreement for the transactions or whether the court evaluates each individual transaction on its own. The Sales Survey also took up the merchants must read their mail case of Brooks Peanut Co., Inc. v. Great Southern Peanut, LLC., a case involving peanut brokers and communications among the parties and their brokers.
3. The Uniform Commercial Code Survey: Letters of Credit (James Barnes & James Byrne).  This survey concentrates on the most significant letter of credit ("LC") issues addressed in cases decided in the United States in the year 2012.
4. The Incoherent Role of Bargaining Power in Contract Law (Max Helveston & Michael Jacobs).

This paper was presented at the KCON in February.

Here it the video for that session:
Posted by Jennifer Martin at 10:06 AM No comments:

The dumbest personal finance decision people make is  . . . getting into debt. See, CNN, Money. Many won't admit to any mistakes at all, but as the chart below indicates, there are plenty of us that do own up to personal finance mistakes. 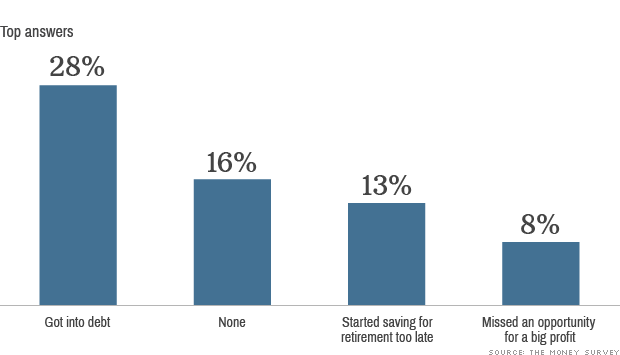 The Survey also covers other great points, like living within your means as a success strategy, but the most surprising point to me is that people feel rich if they have $500,000 (I would expect that to be higher).  Happily, the survey indicates that we've passed the point where people are overly worried about their homes declining in value for the most part.  This is probably a change from a couple of years ago.
The biggest obstacle to financial security: income (31%).  I'm not sure that I agree with that, given some of the other survey results.  If you follow the other pages, it would seem that not getting into debt and living within one's means might be key players here, so long as the income is not too meager.  But, once there is debt and lifestyle challenges, a low income can become that obstacle.
CNN ran a survey back in 2011 that found that half of Americans did not have $2000 in emergency savings.  This new survey concludes that almost two-thirds could handle a $1000 emergency, but only 42% could handle a $10,000 emergency.  It seems we still have a way to go as Americans when it comes to saving.
- JSM﻿
Posted by Jennifer Martin at 10:21 AM 1 comment:

What About Amending UCC Article 2?

What?  Amend UCC Article 2?  You might think I am joking, as it is April Fool's Day.  But, indeed, I am not.  We've successfully amended UCC Article 9 a number of times in recent time.  Why not UCC Article 2?  Yes, the last attempt at this feat lasted a long time and ultimately failed.  There are many reasons why the Article 2 Amendments failed, though.  See Symposium on Revised Article 1 and Proposed Revised Article 2, 54 Southern Methodist Law Review 469 (2001).  The fact remains that Article 2 is still cumbersome, disorganized and plain out difficult to follow.    Might a smaller revision of the type used with Article 9 have success in an Article 2 revision?

As Professor Neil Cohen, Brooklyn Law, commented at the International Conference on Contracts KCON9, a code should be written in a comprehensive, systematic, and preemptive manner.  Professor Cohen observed that Professor Linda Rusch's work on revising the remedies portion of Article 2 accomplished the goals of a good code and had much to commend them. Professor Larry Garvin (Ohio State) concurred with much of what was said, particularly with the clarity, simplicity and power of the language of the draft remedies provisions.  Here's the video from the Plenary Session at KCON9.

So, despite this being April 1, perhaps sometime in the future when we all are sufficiently recovered from the trauma of having a failed Article 2 revision in the first place, we might consider moving toward a modest revision centered on some of the work that held a greater consensus.  Remedies anyone?

- JSM
Posted by Jennifer Martin at 4:34 PM No comments: 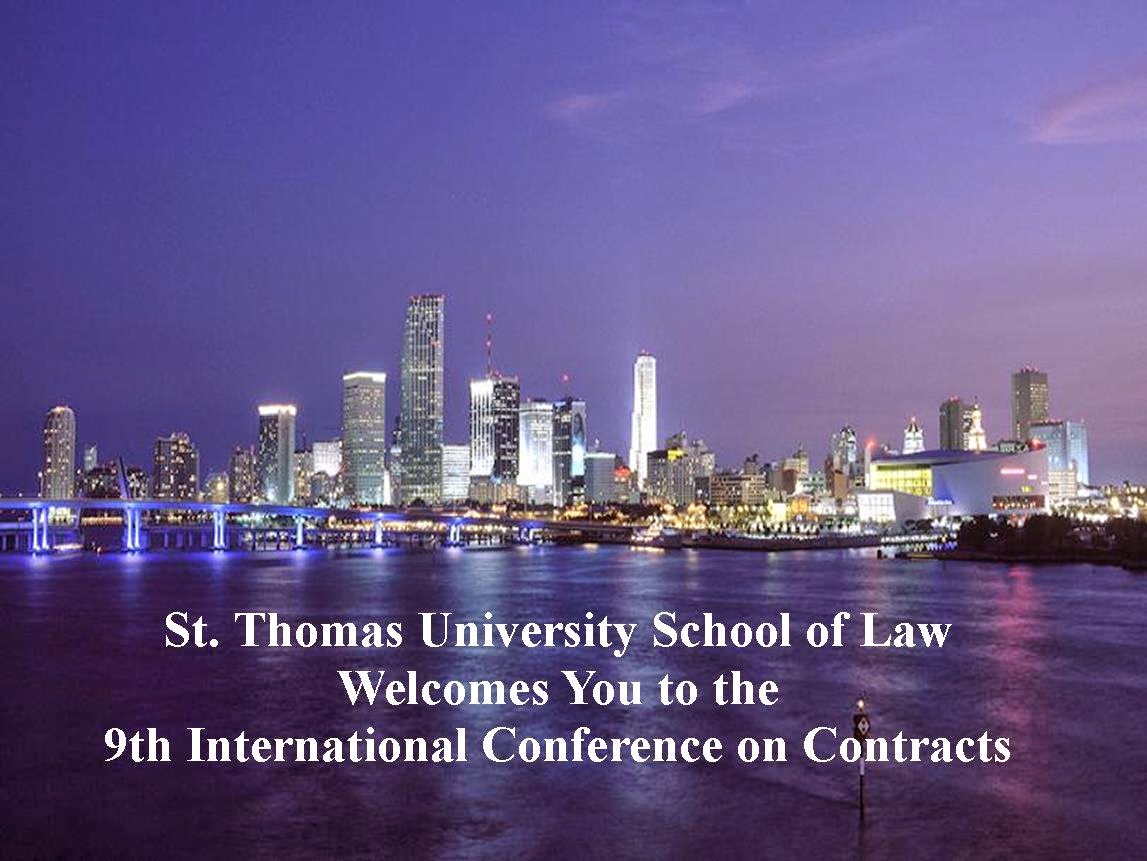 I am pleased to report that all of the video from KCON9 held at St. Thomas University School of Law February 2014 is now available at youtube (Click here to access the Channel).  Some of the highlights of the program included:

Posted by Jennifer Martin at 2:36 PM No comments: