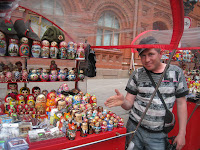 I wanted to share this "fun" commercial picture of a small businessman in action in Moscow, Russia. This kiosk is right near Red Square, but most of the kiosks were only lightly filled with shoppers. Tourism is certainly down in Moscow with hotels reporting occupancy down around 50%. That will make it a tough summer for small sellers. This kiosk owner did manage to relieve us of about 800 RUB for some nesting dolls for my children!
-JSM
Posted by Jennifer Martin at 3:17 PM No comments:

New Investments to the IMF

The IMF has been busy helping countries respond to the economic crisis through financing. Lending commitments are at a record $157 billion. One of the changes, though, has been an easing of the loan conditions that often went along with IMF aid. The IMF has often encouraged political policy changes in exchange for money. Is this a good thing? The tension here is that the countries need the loan money without delay. The IMF is wise to respond quickly to the crisis. That does not mean that the IMF and the borrowing countries, though, are not missing "opportunties" to promote better business and other practices that enhance competitiveness in the longer term. In the end, the borowing countries may still need changes in local laws and governmental frameworks to be competitive. Perhaps now, though, is not the best time to impose such changes given the instability in the borrowing countries already.

Moreover, the IMF's focus may be changing due to the financial crisis with more efforts toward the donor countries. Not only do the larger countries have to keep markets active with developing countries, but they must support the IMF's loan efforts. There does seem to be some action in that respect. Russia, for instance, just announced a new $10 billion commitment to the IMF. Brazil, China (up to $40 billion) and India are also making new investments in the IMF. The additional investments may lead to these countries having a greater say in the business of the IMF and global monetary policy generally. Of course, new commitments are necessary in order for the IMF to continue the financial arrangements with the borrowing countries. The U.S. Senate recently rejected a proposal to eliminate a $180 billion in loan commitments to the IMF. The funding is still pending, though, but has the backing of the White House.

-JSM
Posted by Jennifer Martin at 2:50 PM No comments:

As some of you know, I am teaching Transactions in Emerging Markets as part of the University of San Diego Moscow Program. Of course, paying for things in Moscow is a fun matter! The currency exchange rate for Rubles right now is $1:33.334 RUB. With the less than stellar exchange rate, the company renting me a flat priced the rental in dollars. Since counterfeiting is also commonplace, with one paper claiming that 50% of dollars in Russia are not genuine, Bank of America kindly provided crisp newer issue money! The currency traders in Moscow have been less picky thankfully.

While I've paid for most things in cash, I used my Mastercard at a Кофе Хауз (Coffee House). I checked my online transactions to verify charges and found that I was charged once for our lunch, but again for a slightly larger amount later that day (perhaps someone else's lunch)! The second charge is not mine, an unauthorized charge for sure, but the vender clearly had my card number as we'd been at the shop earlier in the day. I've promptly reported the mistaken charge to the credit card company, but am interested to see how this plays out. As an aside, most banks are now charging 1-3% on transactions for card usage abroad (New Fees For Card Usage Abroad).

After years of legislative wrangling, President Obama has signed a credit cardholders' bill of rights that was passed overwhelmingly by both houses. Last September, the House passed a similar bill that died in the Senate. Last December, the Federal Reserve issued a series of regulations that would have imposed many of the requirements in the new legislation, but not until January or July 2010, depending on the provision. The heightened recent legislative activity had been attributed to a desire to trigger the Federal Reserve regulations more quickly. The final bill, however, calls for implementation 12 months from enactment, meaning that the rules will go into effect only about 1 month sooner than the FED's regulations. The legislation, however, goes beyond the regs in some areas. This post provides a summary of the key points in the legislation. I'll summarize the comments and reaction, and speculate about the effects, in a future post.
Summary of Key Provisions:
Notice: Requires card issuers to provide at least 45 days notice prior to any rate increases or other significant changes, and the notice must include a statement that the cardholder may cancel the card.
Increasing Interest Rates on Outstanding Balances: Limits the ability to increase the interest rate on existing balances to specific situations, including a failure to make the minimum payment for 60 days.
Double Cycling Billing: Prohibits reaching back and assessing interest on balances from the prior billing cycle if the cardholder fails to pay the balance in full. Average daily balance accounting, in which interest is assessed to the entire balance, rather than just the portion left unpaid, is not prohibited.
Allocation of Payment: requires that any payment beyond the minimum be allocated first to debt accruing the highest rate of interest. This provision is substantially tougher than the FED regulation, which would have allowed the banks to allocate payments proportionally among balances of varying interest rates.
Timely Payment: Requires statements to be issue 21 days before the due date, and prohibits assessing late fees when the due date is a day on which mail is not delivered (or not accepted) and the payment is received by mail the next business day.
Over-the-Limit Fees: Requires that the cardholder opt-in to a system in which charges over the limit are permitted with a late fee and limits these fees to once per billing cycle. This provision is also more consumer friendly than the FED regulations, which had left open the possibility of an opt-out scheme.
Minors & College Students: Prohibits the issuance of credit cards to unemancipated minors, unless a parent is designated as the primary account holder, and places strict limits tied to annual income on the credit limit for cards issued to college students.
Means-of-Payment Fees: Prohibits fees for using non-standard payment methods, except for expedited payments by phone on the due date or the proceeding day.
Warning: Requires solicitations to provide a warning of the adverse effects of excessive credit inquiries.
Posted by Steven Semeraro at 5:16 PM 2 comments:

Falling Behind on Your Mortgage?

For those wondering how exactly did all these people fall behind on their mortgages, take a look at a pretty honest personal story in the New York Times. The author, like many, bought a home he couldn't afford, tried to compensate with credit cards and refinancing and had a spouse lose a job. There are tough times for many who bought into the traditional model of rapid real estate value increases and living beyond their means. Reading the piece, it is easy to see how people fall into the trap.

A surprising little aside is that the banks have not had time to foreclose on his home or do a loan modification even though his last payment was eight months ago!
- JSM
Posted by Jennifer Martin at 9:56 PM No comments:

In case you missed it:

- JSM
Posted by Jennifer Martin at 1:25 PM No comments:

Credit card interchange fees continue to be a hot topic. These fees, which credit card companies charge to merchants for the right to accept cards, have been controversial for decades. Visa and MasterCard set these fees for their issuers, and as a result, banks such as Citibank, Bank of America, and JP Morgan Chase do not compete on merchant fees. Merchants also claim that even American Express and Discover do not effectively compete.
Although a massive multi-district class action challenging the fees on antitrust grounds has been chugging along for several years, many merchants apparently believe that Congress may prove to be a more fruitful avenue. A coalition of U.S. merchants calling themselves the Merchants Payment Coalition ("MPC") has launched an aggressive advertising campaign seeking to influence the process.
Last July, the House Judiciary Committee approved the Credit Card Fair Fee Act, which would have permitted merchants to negotiate the fees that they pay credit card companies as a group and created some government oversight if negotiations failed. That legislation got lost in the flurry of activity last fall. But the issue has not been forgotten. Staffers in both houses have indicated to me that Congress plans to address the issue, although no consensus has emerged as to the proper course.
The MPC supported the Fair Fee Act bill last summer, but it is currently refraining from backing any specific proposal. Instead, it has lined up a series of meetings with committee members to express its views.
A number of proposals have been made for increasing merchant fee competition. I have proposed requiring the largest Visa and MasterCard banks to set their own fees. Adam Levitan has called for permitting merchants to surcharge credit card transactions, and Allan Frankel has suggested multi-network cards that permit the merchant to choose the processing network. Regulators in Australia and other countries have sought to limit merchant fees to the amount necessary to cover only certain identifiable costs. As Congress generally moves back into the business of regulating financial markets, it will be interesting to see how it approaches credit cards.
Posted by Steven Semeraro at 6:17 PM 2 comments: