Tales of a Homeowner Wanna-Be 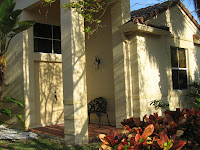 Part of my adventure of moving to Miami, Florida to join the faculty at St. Thomas University School of Law involves the purchase of a new home. Yes, I've already written about the beginning of this journey (See Tales of a Prospective Homebuyer). That was back in April! So, what is it really like? Three months later? Well, I am just a week out of closing and don't have an "official," "final" loan approval yet for the mortgage. There was the "first application," the phone interview, the mass of financial documents for the last two years, the changing loan terms, the worry over the home appraising (this is South Florida after all).

Other parts of this adventure? I since discovered that the seller had been behind on taxes and the house was listed for auction, but was just brought current in the last two weeks. There is also a pending issue on a leaking roof that I was told was fixed, but when I had the roof re-inspected found out the broken parts were just glued together! My prospective insurance agent raised the hazard insurance premium by 50% on the spot, even though his quote was only two weeks ago (found new insurance agent!). The new challenge is the documentation on the purchase funds for the mortgage lender, which is very particular.

Seriously, the days of no-documentation loans seem to be past, as far as I can see (See, The Basics: No Doc Mortgages, MSN). So, things are naturally hard out there from a loan perspective. Perhaps they should be . . . The large number of foreclosures and short sales out there also make it difficult for home buyers, even though prices can sometimes be favorable. My limited experience in shopping around for lenders indicates that while mortgage rates might be good (See, Mortgage Rates on 30-Year US Loans Fall to Record), the lenders are being more careful than in the past making it harder to purchase even if you want to in this market. But, with the housing market plunging after the government incentives for home buyers ended in April (See, Pending Home Sales Fell off A Cliff, CNN), one might expect things to be easier on buyers.

In some ways it is easier than back in April. For instance, it was much easier to secure a contract on a home than a couple of months ago. But closing is still difficult. While I have every hope that the home will close on time, my skills as a detail, paper-collecting transactional lawyer have served me well! There is now talk of what "time of day" we might be closing, so the hope is that this homeowner wanna-be will actually be just plain homeowner soon.
-jsm
Posted by Jennifer Martin at 10:47 PM 1 comment: