Bankruptcy as "Digging a Hole Far Too Deep"? 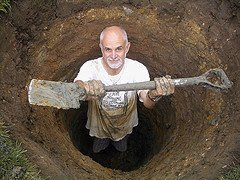 People just don't seem to understand bankruptcy. Given the smear campaign of recent years, it's not surprising that consumers would fear and distrust a "bankruptcy" filing by GM and Chrysler. But today, a key leader with decision-making authority on the future of the U.S. auto industry seems to have revealed her own misunderstanding. House Speaker Nanci Pelosi rejected a GM/Chrysler bankruptcy as "digging a hole far too deep."

I've got news for Nanci and others who might feel this way: GM and Chrysler are already in a "hole far too deep." Bankruptcy is not the cause of financial ruin; it's a response to the financially ruinous situation in which debtor-companies already find themselves. Indeed, bankruptcy in the form of U.S. Chapter 11 (and a growing number of similar laws around the world) is a response designed to overcome the problems that GM and Chrysler face, to facilitate a rehabilitation and get them out of the hole. It accomplishes this, in part, by making it starkly apparent that the end is nigh unless everyone stops playing chicken and seriously considers the shortest "haircut" they're willing to take (that is, the best concessions they're willing to offer to save the company), and irrational holdouts can get a deal "crammed down" on them by a majority vote of the more deal-welcoming creditors. Lenders, bondholders, suppliers, employees, retirees, shareholders, etc., all are forcefully seated at a "no B.S. zone" bargaining table and sternly instructed that if they leave, there's a cliff on the other side of the door.

The "hole far too deep" is where GM and Chrysler are now and where they and their various constituencies (not the least of which the U.S. economy) will be if solutions like a bankruptcy-like workout are not seriously considered . . . and soon.

That being said, for the reasons I mentioned before, I'm afraid an irrational overreaction by the market for GM/Chrysler's products might well scuttle its business if a Chapter 11 filing is made. The solution points up the misunderstanding inherent in Pelosi's comment: GM and Chrysler are already in what might be called informal bankruptcy. Either they respond to Harry Reid's demand to produce a workout proposal that the Treasury can fund by the beginning of December (an out-of-court workout, an informal "bankruptcy" that keeps that psychologically troublesome word out of the press), or they face literal "bankruptcy," which would strengthen the debtor-companies' hands with respect to their creditors, but might well destroy the "goodwill" upon which their business depends. Either way, GM and Chrysler are already in a "bankruptcy" hole, and their leaders and advisers need to go back to Capitol Hill, this time with a serious proposal for a sustainable workout, not just a handout.
Posted by Jason Kilborn at 12:38 PM