Bracing for the Wave of Retail Bankruptcies 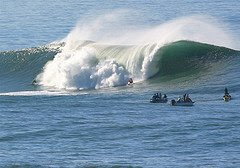 I don't want to seem too gleeful about this, but we insolvency professionals are likely to be in the spotlight for a while during this Year of the Bankruptcy. I'm surprised it took so long for the W$J to come out with the first such story of 2009, but today's Marketplace section (on B1) announced a Wave of Bankruptcy Filings Expected From Retailers in Wake of Holidays. The current period, unprecedented in so many ways, will likely see an unprecedented and massive restructuring of the U.S. retail sector. Much of the activity will be liquidations, it seems to me, whether out of bankruptcy altogether, under Chapter 7, or even in liquidating Chapter 11 plans. Our unsustainable reliance on out-of-control consumer spending seems to have met its demise. Or maybe this will be a temporary lull, with consumers pulling out the stops once the job market rebounds. One way or another, 2009 will be a rough one for many. Here's hoping that this year can also be marked as the Year of the Great Recovery.
Posted by Jason Kilborn at 5:43 PM