Commerce Hums Along Even in Hard Economic Times 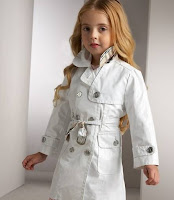 We hear much news about the trouble with the economy. In today's news alone, there were concerns about cooling in auto manufacturing, losses in technology, slower manufacturing in New York, and double dip risks in Europe. Alongside the financial turmoil and worries, Bloomberg yesterday ran a piece on parents who must not be overly concerned about such things. Apparently, there is quite the market for designer clothing for children, including a $750 Burberry trench coat! Sale of designer coats and jackets for children is expected to be up a whopping 12% this year. Luxury goods generally are expected to be up 10%. Apparently, there are nice Gucci lines for pets as well . . . Not bad in a year with worldwide GDP quite low (see, EU Raises Italian 2010 GDP, Canada's GDP Growth Sets, China's GDP Slows, Oil Spill May End Up Lifting GDP Slightly).

While I am a believer in doing my part for the economy, my group of three kiddos (3, 5 and 13) are not partaking in these really cool clothing options! Not only is this a really lot of money, but my kids grow way too fast for this extravagance! Hope that those who are buying designer children's clothing are not financing the purchases on a credit card. Consumers living beyond their means certainly contributed to the current financial downturn.