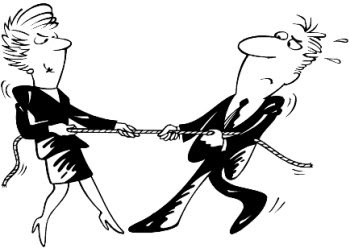 Update: The final amended language of the Credit Card Fair Fee Act, as reported by the House Judiciary Committee, is now available. It employs a rather clever two-step device in an attempt to stimulate negotiated merchant fees. First, as blogged below, the bill extends antitrust immunity to groups of merchants and banks negotiating card acceptance fees. But then, it pulls the immunity back whenever a card issuer, or acquirer, or a merchant “is engaged in any unlawful boycott.”

Could this language mean that neither the merchant group, nor the banks, can walk away from the negotiations if the other side does not agree to acceptable terms? The take-it-or-leave-it approach has long been the banks’ modus operandi. Taking this threat from their arsenal could meaningfully change the market dynamic. Still, one has to wonder how a negotiation is supposed to proceed if the parties can’t threaten to walk away.

The bill would require the largest merchants, card issuers, and acquirers to produce cost information to the DOJ Antitrust Division, and Division representatives would take part in the negotiations. All this seems to stack the deck in favor of some sort of cost-based, negotiated merchant fee, which would be fine if costs served as a basis for setting an efficient fee. Unfortunately, they don’t; as the economist Michael Katz has explained.

A competitive means to set merchant fees would likely be superior to a cost-based system. There are at least three proposals in the literature to set fees competitively: (1) placing the costs of payment mechanisms on consumers by, for example, allowing merchants to surcharge card transactions; (2) empowering merchants to select the network over which a payment will be processed; and (3) forcing large card issuers to negotiate their own interchange fees. I have advocated for the latter, but all three seem to hold more promise that the Judiciary Committee’s current approach.

Original Blog: On July 16, the House Judiciary Committee reported out Congressman Conyers’ Credit Card Fair Fee Act over a sharply divided, yet surprisingly non-partisan, 19-16 vote. The amended text is not yet available, but you can piece it together from the hearing transcript at http://judiciary.house.gov/hearings/transcripts/transcript080716.pdf.

The bill as reported differed significantly from the bill originally introduced in March. Both bills are intended to combat the problem that merchants need to accept Visa and MasterCard so desperately that they have little ability to resist fee increases. At the heart of both the original March bill and the amended bill is essentially a bargaining order, requiring the banks issuing cards on large systems to negotiate with merchant groups on interchange fees and exempting from antitrust scrutiny the agreements reached in these negotiations. A key provision of the original bill would have created a panel of interchange fee judges, who would have set the fees if the parties could not agree. The Department of Justice and Federal Trade Commission both opposed the bill and were particularly critical of the panel of judges. At the July 16 hearing, Congressman Conyers removed the panel proposal from the bill. In addition, he added provisions (1) permitting small banks and credit unions to exempt themselves from these negotiations and (2) requiring that merchants do not simply retain fee reductions as profit.

This bill fails to engage the real problem with interchange fees, because a bargaining order is unlikely to reduce the card systems’ market power. Removing the judicial panel means that there is no real threat if the card companies fail to engage in meaningful bargaining. Still, eliminating the panel was a wise decision. Efficient interchange fee setting cannot track costs or any other factor accessible to a panel of experts. Appropriate fee setting must take account of demand conditions that are simply inaccessible to a regulator and probably the market participants as well. Given that, there seems to be little reason to provide an antitrust exemption. Who knows what mischief these bargaining groups might get themselves into?

The remedy to the interchange problem will ultimately be competitive, not regulatory. Congress could bring this about by simply requiring the large card-issuing banks to set their own interchange fees. If Discover can set an independent merchant fee with a market share of 5-6% of transaction volume, Citibank, Chase, Bank of America, CapitalOne, and perhaps a handful of others should be able to do so as well. Merchants would have substantially more leverage if they could refuse one issuer’s cards as opposed to the entire Visa or MasterCard association. Congress could achieve this result by simply prohibiting the card systems from enforcing the aspect of their honor-all-cards rule that requires merchants to accept the cards of every issuer on the network. Traditionally, this sort of remedy has been opposed as unworkable. After all, there are thousands of issuing banks. Requiring all of them to set their own fees, many have claimed, would be a mess. One positive aspect of Fair Fee bill is that it apparently recognizes that the rules that apply to the big issuers should not necessarily apply to smaller players. The bill applies only to systems with more than 20% of card volume and permits small banks and credit unions to exempt themselves from the negotiations. A competitive bill might require only those issuers with more than 5% of card volume to set their own fees. Without the large issuers in the mix, Visa and MasterCard could continue to set interchange fees for their thousands of smaller issuers without the power to compel merchant acceptance that has led to excessively high fees.
Posted by Steven Semeraro at 4:27 PM

Three questions on this:
1. How does the independant bargaining for banks that have over 5% of the issuing volume work with fact that acquirers and issuers still work independantly, even if they are owned by the same bank?

2. Could this cause such banks as Chase or Bank of America to begin to leverage their dominance in the issuing and acquiring businesses by creating their own networks?

3. The other question is does allowing a dishonoring of an individual issuing bank create a regulatory taking of Visa and MasterCard by destroying their brand and making their systems useless?