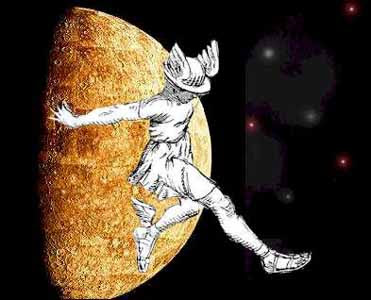 For my first blog entry, a little history about commerce might just be great. So, at this moment of the launching of the commercial law blog, a mention of Mercury, the Roman god of commerce. Mercury . . . to whom commercial law professors (though not necessarily our students) are thankful for words such as market, merchandise, and merchant. Apparently, Mercury, was the patron of travelers and merchants (he was the deity of commerce after all), but also to rogues and thieves. The tie-in between merchants and rogues and thieves brings to mind a recent case involving Big Lots Stores, Inc. and one of its distributors, Luv N’ Care. For those who want to read the case see, Big Lots Stores, Inc. v. Luv N' Care, 62 U.C.C. Rep. Serv. 2d (CBC) 522 (S.D. Ohio 2007). The case involves a less litigated provision of the U.C.C. Article 2, 2-312(3) requiring merchants to warrant that goods sold are free of claims regarding infringement. Of course, the basic idea here is that a buyer should receive a good, clean title to goods.

Luv N’ Care sold Big Lots Beatrix Potter products after the expiration of its license from Frederick Warne & Co., Inc. Beatrice Potter as many will remember created the world of Peter Rabbit and his friends and family (Flopsy, Mopsy and Cottontail among them). Big Lots brought suit for breach of warranty and Luv N’ Care counterclaimed to recover on unpaid invoices. While there is a much made in the case about when a contract arose and the like in an effort by Luv N’ Care to try to cast the sale as within the license period, the court grants summary judgment to Big Lots on the issue of infringement and is required to indemnify Big Lots on any damages from the sale of the infringed Beatrice Potter products. The seller Luv N’ Care, though, does in the end receive payment on its invoices (after the damages from infringement are subtracted, of course). Big Lots in the end becomes a good case about both merchants and rogues (if I might not be too harsh here, perhaps a thief as well)? It would seem that Mercury would be the patron of both.
Posted by Jennifer Martin at 11:31 PM

As a former Latin/Roman history buff, I took it upon myself to look up the derivation of the word "market." As suspected (and contrary to what was suggested in class), "market" is derived from Middle English, via Anglo-Norman French from the Latin "mercatus" from "mercari" which means "to buy." From this, one can see the linguistic connection to Mercury.

not so surprising to me. Merchants were considered little better than thieves for much of the history of western civilization. The taking of profits and/or the charging of interest was frowned upon heavily by the Church through at least the 17th century (ironically enough, the Church was taking gigantic profits (or at least economic rents) on their activities at the same time). Until modern economic thinking, and general liberalization of religion, emerged during the enlightenment, gains from trade were commonly viewed with skepticism at best.