"Should executives get to keep lavish pay packages when the profits that generated their compensation go up in smoke?" A growing, grumbling chorus says "yes":

With losses mounting at the nation’s largest financial institutions, years of earnings have been erased, investors have lost billions, thousands of employees have been let go, and taxpayers have been tapped to rescue the financial system. But executives who helped set the problems in motion, or ignored them as they mounted, are still doing fine. Humbled, perhaps, but well paid for their anguish. 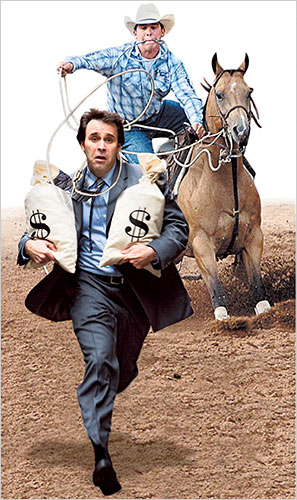 Executives at seven major financial institutions that have collapsed, were sold at distressed prices or are in deep to the taxpayer received $464 million in performance pay since 2005 . . . Almost half of that consisted of cash compensation.

Yet these firms have reported losses of $107 billion since 2007, a result of their own missteps and the ensuing economic downturn. And $740 billion in stock market value has been lost since these companies’ shares peaked in 2007, just before the housing bubble burst.

Against that landscape, a growing chorus is demanding that executive compensation snared shortly before problems emerged be given back.

“There is a line that separates fair compensation from stealing from shareholders,” said Frederick E. Rowe, a money manager in Dallas and a founder of Investors for Director Accountability, a nonprofit group. “When managements ignore that line or can’t see it, then hell, yes, they should be required to give the money back.”

Corporate boards that awarded lush executive pay packages almost always justified them by saying they encouraged superior performance and were directly tied to benchmarks like profitability.

But now, with a public backlash against excessive pay and taxpayer lifelines extended to crippled companies, the idea of recouping compensation, known as “clawback,” is gaining traction.

Currently there is no legal mechanism for forcing the regurgitation of past pay, so such efforts would need to be bolstered by new legislation. Clawbacks also promise to be a hot-button issue at shareholder meetings in coming months.
Posted by Jim Chen at 1:40 PM